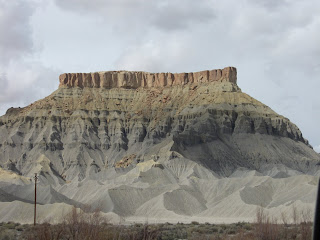 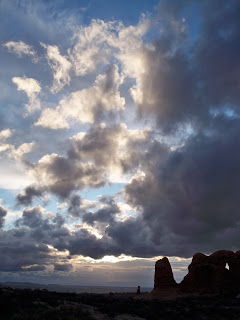 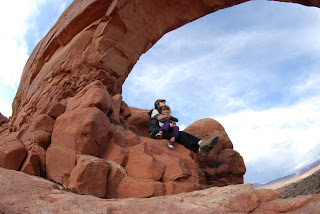 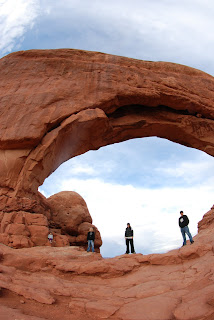 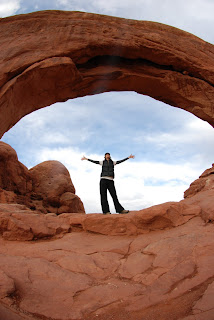 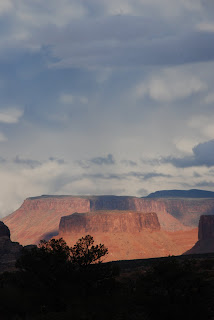 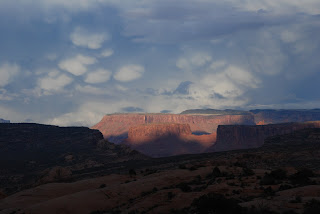 From the missing one hundred hands,  the land transforms, and we’re driving on the moon—Luna Mesa. Soft rolling limestone hills. More solid, red sandstone blocks underneath. Like a fortress to another world. After a long day, we finally cruise into Arches at almost sunset. Immediately, we stop at the Windows loop trail, leading to three massive arches: North & South Window and Turret Arch. Late in the day, there are scattered visitors, but with a little patience, we are able to score the arches alone. With Dan’s new camera and fish-eye lens, we partake in a little family photo shoot. We are the “Partridge Family” spread out around the North Arch. I am the lone thinker, framed in an arch, gazing into the sunset. Grayson kicks back, his long legs filling the frame before him. And Nova salutes, the arch king himself. Silly but fun. Hard to take a bad photo here. Here in a land so perfectly sculpted, it makes you wonder why we humans even try. Nova makes a "rock pizza" and all seems just right.

The sun sets and we try to capture the perfect colors and textures that sing the earth a lullaby. From behind, the two window arches resemble the eyes of a dragon that protects this magic place. He watches leave, and almost smiles. Off to the north east, the last bit of sun highlights a mesa into pure perfection. Rain gathers in the clouds, creating cup-fulls of moisture that hang ever so delicately.

The park is home to 1,500 arches, formed when sediment covered  a layer of salt from a left-over ocean.  The salt and sediment flowed upward, forming up-folds that collapsed from dissolving salt.  These faults and joints allowed erosion to carve freestanding fins.  Freezing and thawing peeled away rock, forming holes in the fins. Rockfalls made for bigger arches. Present-day arches will collapse (see the Wall Arch in the photo,) but new ones continue to form. The circle of arches.

The land is simple in Arches. Sandy terrain with bits of grass, cacti, shrubs, and the lone wildflower. In some places, you will find dark patches of brittly crust (75% of the Colorado Plateau) call crytobiotic soil. The highly important soil is made of up cyanobacteria, mosses, soil lichens, green algae, microfungi, and bacteria.  Cyanobacteria helps to form erosion-resistant soil, and captures nitrogen from the air to feed the plants in such a harsh environment. This super soil also makes other nutrients like calcium, potassium, and manganese available to plants.  Expanding to up to ten times its original size, allowing the crust to hold in the moisture. Trampling on this soil, can kill decades of microscopic growth.  Pieces of this broken, brittle soil can get carried off by the wind, covering healthy super soil. No sun, no photosynthesis, no super soil.  Damage crytobiotic soil can recover, but it may take up to 250 years for disturbed sections to become functional again!

Leaving no trace takes on a whole new meaning. And helps us to remember that even the tiniest of creatures can save the world.

It's no wonder that the provocative writer, Edward Abbey, spent time in Arches and wrote so beautifully about this magical place. In DESERT SOLITAIRE, he says that there is poetry and truth in simple facts. And in writing about Arches, he tried to "create a world of words in which the desert figures more as a medium than as material. Not imitation, but evocation."

I am evoked here. Thank you Edward Abbey.

Labels: thank you to dan and grayson for the amazing photos of arches