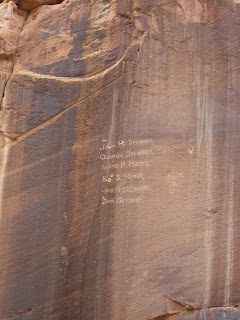 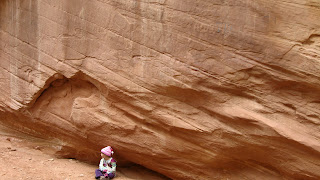 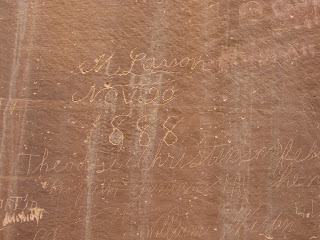 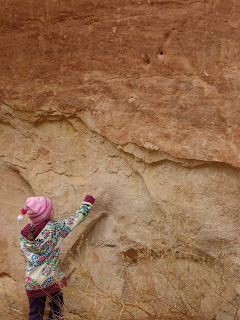 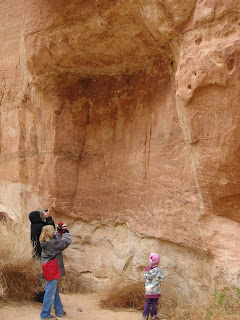 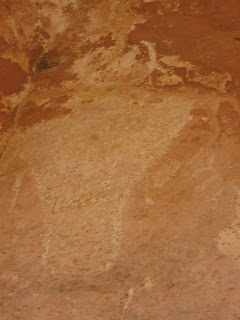 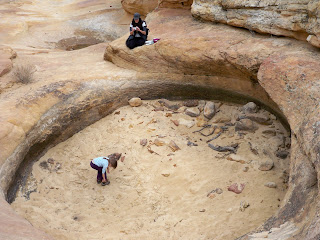 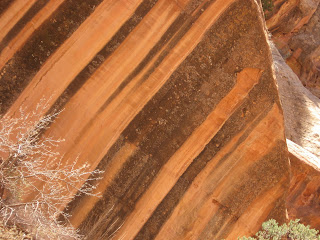 Imagine more rocky red mesas. Mountain peaks set against a sleepy sun. And then orchards. Orchards of cherry trees, just waiting to bloom in pink and happy and light (a few more weeks. We just missed them! Cherry-picking season would be cool, too.) Capitol Reef seems to be Utah’s secret National Park. Tucked between Bryce and Arches. Full of breathtaking geology and history. We luck out once again, and score the LAST spot in the campground. Dan and Grayson take a steep, sunset bike ride, spotting 17 deer on their descent. The sun goes down, and after cheese and egg quesadillas we nestle in, sleep once again under the amazing Utah sky.

So many hikes to choose from, but we decide on Capital Gorge. A hike into a historical gorge (dangerous in flash floods. We anxiously watch he cloudy sky!) We are instantly awed at the beginning of the trail by Fremont Indian petroglyphs. Suns. Antelope. Warriors. Nova imagines herself an artist, etching her own legacy in the rock for future generations to see. As we move through the gorge, we notice signatures cover the stone walls. Names and dates of Mormon settlers as early as the mid 1800s rise high above our heads. The sandstone has worn away, leaving artistic, circular pockets that surround the ghosts of these adventurers. I think about hardship and the ease of our life today. For both settler and the Native American, a life at Mother Nature’s calling.  Rainstorms. Draught. Freezing temperatures.  Do we have any idea how lucky we are?

Further ahead, we make it up to the first water-pocket fold. Limestone buckled millions of years ago, leaving “tanks” formed into the stones that collect water. This pocket is dry, and perfect for a Nova sandbox.  We meet a family from Israel (now living in Denver,) and an older couple touring the West.  It’s funny how nature brings people together. People from the farthest reaches of the world, or those who live just around the corner. A gift from Mother Earth. Despite her hardships, she brings us beauty in the form of artistic stone or a friendly smile.  It’s carried on in human hearts. I am thankful for the rocks and the stones, and the people that love them.