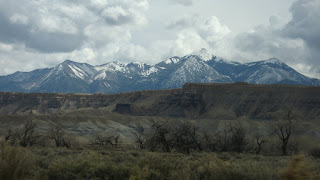 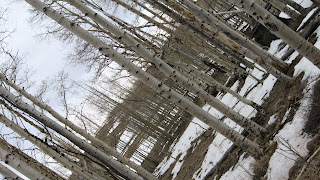 From Bryce east toward Escalante. A canyon basin. Light sandstone and scattered juniper.  The fading light opens up on hills into canyons of fire; a crying wall. Snaking rivers of cottonwood. Trees that only grow near a water source. A flood of pale green. In the distance, dark hills. Tendrils of snow. Smooth sandstone. Waves of texture and color.
We climb in elevation, and the drive into sunset is breathtaking. At dusk, deer feed along side the road. Fields of barren aspen stand out in contrast of the fallen snow. Black. White. Lines. Flocks of robin burst red through the stark, white slender stalks. The trees stand tall in early spring. Row by row, waiting to bloom. Some have fallen, and in the tight space are supported by each other. Arms stretch out as if to say, "Don't worry, we'll catch you." Soon, the aspen will wake up in the light.  But now, in the soft, dark twilight, they sleep. Highlighted by Manzanita trees; burst of fireworks in the snow.
The drive is slow. The kind of drive that makes you feel like you're somewhere else. In a place of time past, or a place that exists in another world all together. It gives me hope that the wild is still wild.
Posted by Lori at 9:29 PM