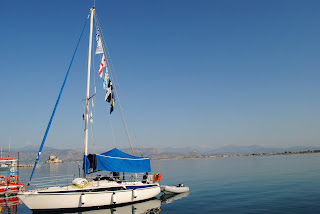 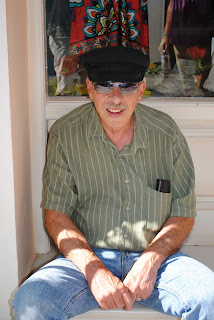 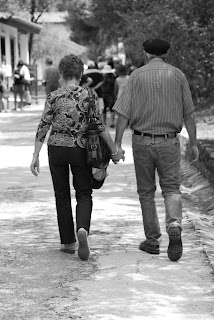 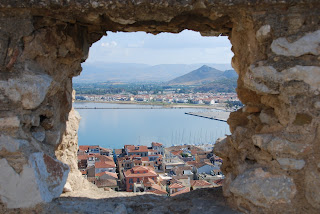 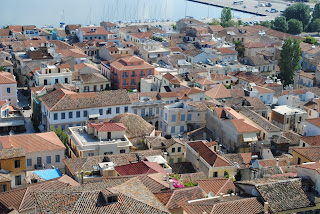 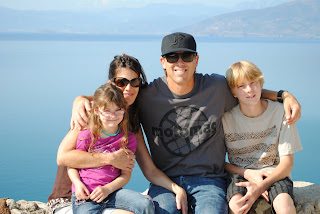 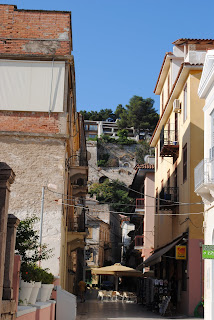 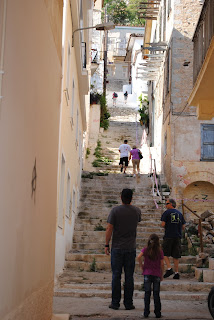 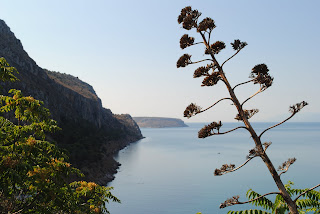 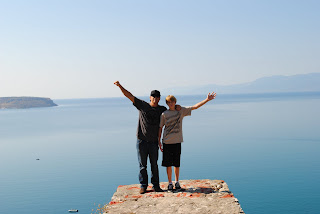 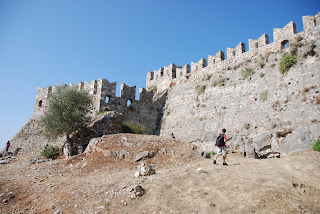 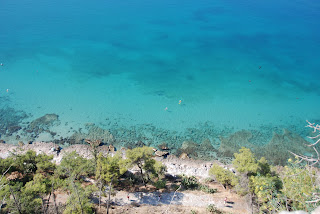 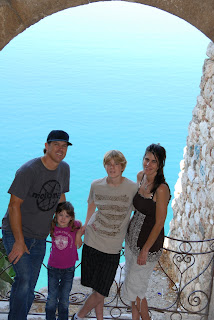 Lucky our guide decided to make a spontaneous stop. Naufplio--a gorgeous beachside town south of Mycenae in a natural peninsula in Peloponnese. We stroll through the harbor and into town. Beautiful cobblestone streets draped in bougainvillea. Hiking uphill on small steps, we aim for the clock tower of an old fortress that's become almost a skeletal foundation of the town. It's open--not crowded--another integration of the old and new. At the top, we are mesmerized by the aquamarine cove down below and wish more than anything to fly off the cliff, land in snorkel gear, and spend the next two weeks underwater. But alas, time ticks away. The view is full of patterns. Red tile roofs. Arches along the tips of the fortress. An old prison/island out in the bay. It's an incredible place. One hit hard by the economy. Shop owners rely on whatever they can sell. They make due if they can, but take each day with hope. Back in the square, we meet a cute Greek couple (actually, it's my dad in an adorable Greek cap and his wife.) They walk hand in hand through the romantic plaza. Love. Family. Paradise. All wrapped up into one.
Thank you Jeremy Woo-Sam for your lovely shots of Naufplio and our family!
Posted by Lori at 10:08 PM No comments:

Zeus Outside my Door 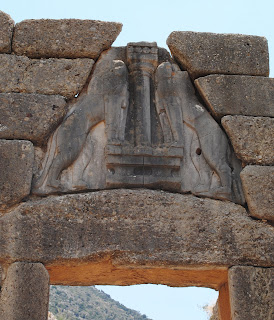 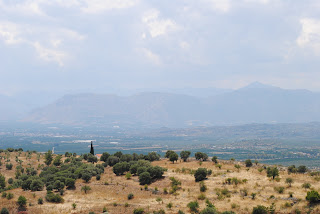 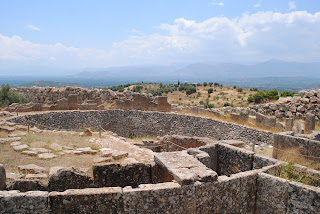 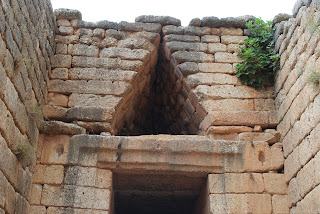 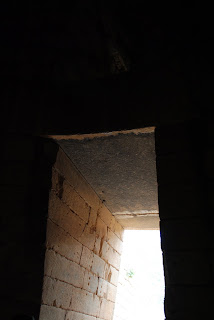 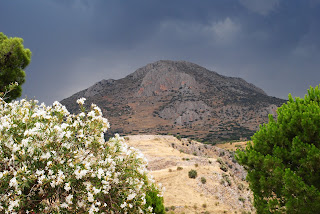 The drive from Corinth to Mycenea gives us an amazing glimpse into the country. Greece itself is on a point where three continents meet--creating a variety of flora. (Think olives and wine. Yum.) We pass glorious vineyards. White and pink oleander planted along the roads to ward off animals and prevent road kill. Small shrines (although some are really HUGE) are scattered roadside--iconostatse--18th century traditions built in memory of a lost lives. In the old days, the shrines held a bottle of red wine to honor the deceased. People would stop by to take a shot. (Humm...alcohol on the road? Who's idea?) I watch goats scuttle along the rocky cliffs, climb past orange trees as we get closer to the great center of power during the late Bronze Age: Mycenae.
It's a gorgeous mountain, naturally protected and crowned with the remains of ancient palaces and walls. We walk up the steep path to the entrance of the citadel--the Lion's Gate. Two lions stand as sentries of protection, leading into the palace. This legendary carving is the earliest known piece of European sculpture.
Just inside the Lion's Gate, we spot the grave circle--home of the iconic golden mask of Agamemnon. This site, once thought only a legend (founded by Perseus) in the poetry of Homer, was discovered by an amateur archeologist named Heinrich Schliemann in 1870. Mycenae was ruled by Agamemnon, the great Greek king who led troops against Troy. Upon returning victorious, he was murdered by his wife, Klytemenestra and her lover. Up toward the top of the site, we pass the remains of the bath where this crime took place. (Those Greeks are all about drama.) Despite it's dark past, it's a lovely walk around the mountain--views of green as far as the eye can see. An unusual feeling to be a present participant on an ancient stage.
We check out the Treasury of Atreus (Agamemnon's father--who they think the golden mask really belonged to.) The Tholos Tomb is empty--long ago pillaged, but it's sheer size (5.4 meters high) is breathtaking. It's muggy. Dark. It's emptiness creates such a void. Memories stolen. Outside, dark clouds rage. As we step through the threshold, thunder sends its voice across the sky. Have we angered the gods?
Who knows. It's true--we're observers of ancient myths come to life. Past cultures forever vanished. But somehow, the ancient feels not so far away. And it wouldn't surprise me in the least to find Zeus or Poseidon standing outside the door.
Greece. It's just like that.
Posted by Lori at 9:42 PM No comments: