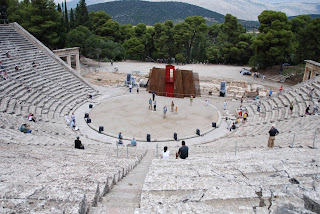 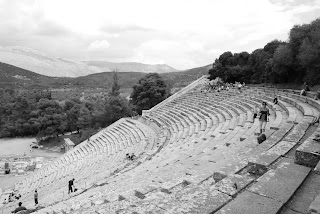 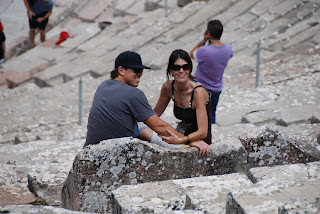 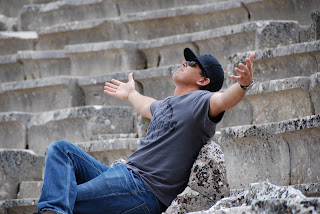 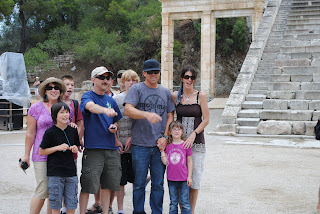 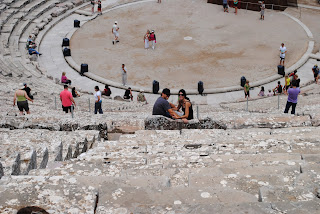 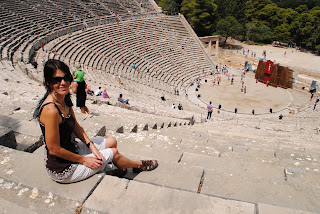 Drama. Tragedy. We owe it all to the Ancient Greeks. Their open-air theaters were built on hillsides for their terraced seating. For the them, drama meant healing, and these theaters were often constructed near sacred locations. Today, most of the ancient theaters have seen better days. But the origins and advanced architecture are apparent in Epidaurus, the best preserved Greek theater that lies near the sanctuary of Asklepios, god of healing. Here, we climb the terraced seats (once wood, now stone) toward the top. Midway, we lounge in "throne seats" ornate stone chairs designed for ancient VIPs. We do feel royal, looking down below at the circular orchestra, or main performance space--known as the "dancing place." Now thought to have once had the altar Dionysus at its center. This place was grand, and still is.

Sitting in the "theatron" or "seeing place," we are the audience, watching and listening as fellow guests belt out tunes and hum bars down below. Fifty-five semi-circular rows provide space for 12-14,000 people--and is still used today for performances of all kinds. The sounds are amazing--designed with three locations at its center for perfect acoustics anywhere in the theater. Historians believed that the actor's building was spread toward the back across the orchestra. While the choir remained in the circle during the whole show, the actors made several entrances and exits through the doors of the building.

We descend the 55 rows of seats into the center circle. There on cue, we sing "Happy Birthday" to my dad. One of many 75th b-day celebrations he is to have on this trip-- to the home of his ancestors. Greece itself often feels like a place of healing. Here at Epidaurus, people attended the theater as a part of their treatment. A way to purge the demons and bad will inside. I think the magic still exists. The inspiration of a live performance--truth that pours out through a character, a musical note, or a song.

Those Ancient Greeks had it right thousands of years ago. Art is healing.