Being away for a month means life happens. After a few attempts, we finally book a guided hike up to Mount Skopos with Spiros & Sabina of www.forazakynthos.com, two amazing ambassadors of Zakynthos. We are instantly enamored by them both and by Sabina's dog, Greco, the ultimate hiker and retriever who keeps pace with us or takes the lead as we ascend just before sunrise up this magnificent mountain, Skopos. Along the way, Greco meets a tiny black kitty (Greco has kitties at home in his pack.) They're instant buds and Greco "herds" little black kitty up the mountain. Together, the two and four-footed head upward, full of love and excitement for not only the view of the gods above, but for each other and for this island.

Sabina is enchanting and such an expert on the flora of the island. She's an artist, teacher, hiker and naturalist from Austria who winters in Vienna and summers in Zakynthos. She's Austrian, yet a Greek at heart with love for the island, culture and history. She reminds us that "everyone comes from somewhere," a universal sentiment that can heal the world, if everyone was truly listening.

Spiros is an expert in the culture and history and opens us up to so many unknown facts about the island. We discuss how Greek-Americans have a strong connection to Greece and he jokes that maybe even a stronger tug that native Greeks. It's a pull I feel every day. One that began a hundred years ago when my grandparents immigrated to the U.S. and indirectly severed years later as they both passed away when my father was a teenager. It's a thread I've searched for on my own, fueled by my experiences and stories told by my father and his siblings. It's a tug I've followed and created on trips to Greece, crazy adventures to Nemea, my grandparents' village and now faraway escapes to a tiny island in the Ionian. A current I will forever follow through the sea on and the wind.

The evening is warm, yet quickly the sun begins its own descent up Mount Skopos. Owls and hawks swoop overhead.  We arrive at the top and at the Monastery of Panagia Skopiotissa, the oldest church on the island. We cannot see inside this evening, but the essence and ancient wisdom and spirit is still felt through the earth as we scramble over the ruins of a thriving monastery. Built before the mid 15th in the shape of a cross atop the temple of Artemis, it was given and still owned by a local family.

The sunset is truly a masterpiece in the sky. Across the water is the opposite mountain, a temple to Apollo. Artemis and Apollo, the twins of Zeus, protect and stand guard of this gorgeous place, still so alive and so rich.  Our feet are fastened to the earth as the wind lashes violently at the top of the world. No fetching pinecones for Greco. But the wind reminds us of the power and majesty born into this island.

The hike back down is dark and magical. A snake slithers by and above we are watched by Casseopia, Scorpio and the Big Dipper.

So much to be thankful for. So much beauty around us in the land, plants, animals and people. We're all wrapped together in the wind and the sea and ancient temples below us.

Enchanted above and below and inside. 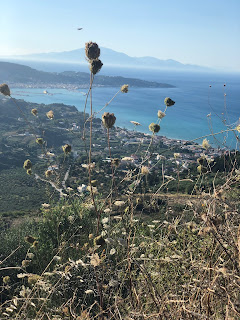 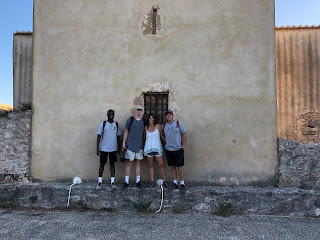 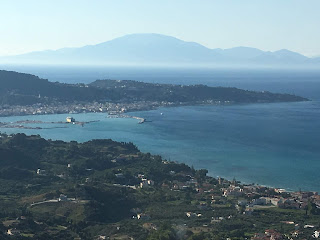 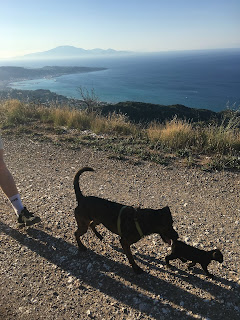 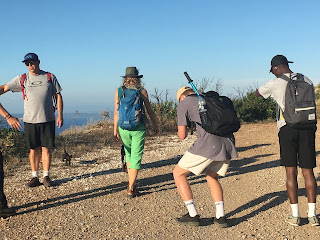 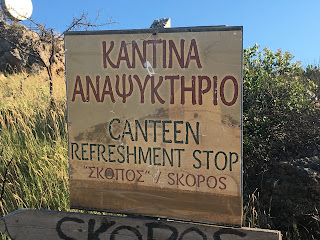 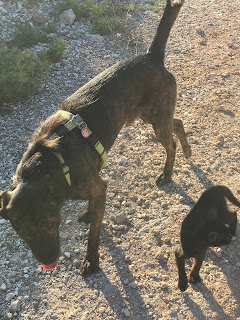 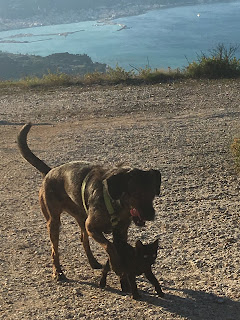 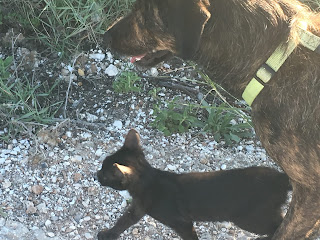 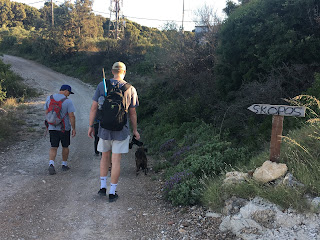 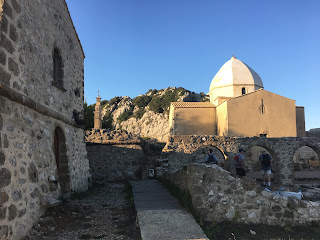 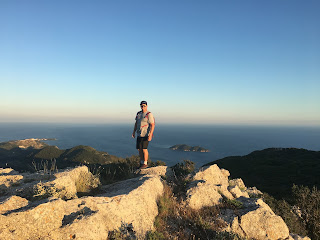 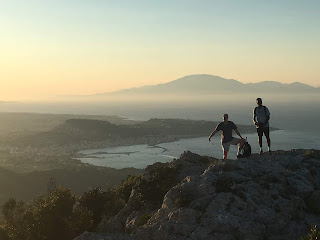 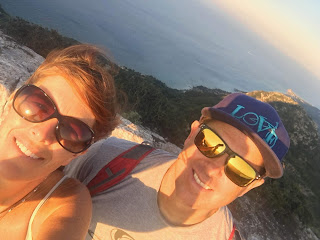 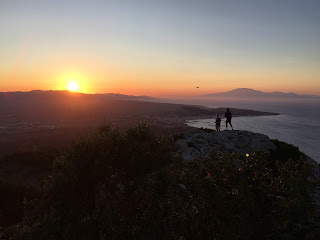 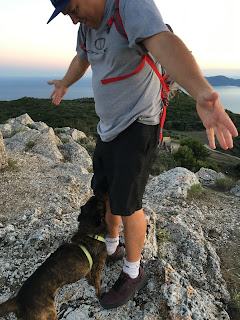